Inspired by the Kroll Opera House (Krolloper Berlin) in the 1930th and the conductor and composer Otto Klemperer (1885-1973). 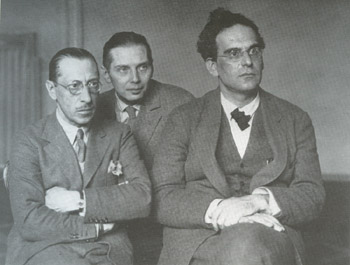 The Kroll Opera, run by Otto Klemperer, existed only from autumn 1927 until 3rd July 1931, and was officially called ‘State Opera at the Square of the Republic’. Igor Strawinsky, Ewald Duelberg und Otto Klemperer

The Kroll opera then was closed down 1931 due to political and economic reasons. During this short period, a time of great intellectual tensions between the young ideals of the Weimar Republic and the conservative and nationalistic tendencies, music- and theatre history was written there. Klemperer did not only show new productions of classical works, which become the basis of a completely new style of theatre, leaving the pompous old-fashioned Stateopera style behind, but also produced contemporary works by Stravinsky, Hindemith, Milhaud and Schönberg, staged by artists, set-designers and directors such as de Chirico, Moholy-Nagy, Schlemmer, Neher, Gründgens and Fehling. After the fire of the Reichstag, the parliament of the Reichstag used the Krollopera, just opposite from their building as their new venue. But soon it had run its course in this function. With the new law of 23rd March 1933 the Reichstag resigned in the Krollopera. After this date the only aim of meetings here were to enthusiastically celebrate the will of Adolf Hitler. The Krollopera was badly damaged during the Second World War. The square was cleared completely in order to make space for the architectural plans for the city by Albert Speer (1926 called Kings Square, then called Square of the Republic only to be renamed Kings Square again by Hitler after his takeover in 1933). The original symmetry of the square, where the Reichstag and the Krollopera used to stand, was only vaguely to be recognised thereafter. The famous colum (Siegessäule) with the Godess of victory (Goldelse) was moved to the Big Star Square. On the 27th March 1951 the ruin of the Krollopera was demolished. 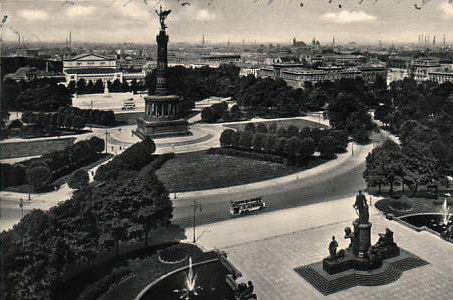 The Plot of the filmopera Kroll
The film has two narrative threads: the story of a musician named Klemperer and that of a female singer.  These parallel narrated stories are closely interwoven through the recollections of Gold Else (a bronze sculpture on the Victory Column in the Great Star) of the Weimar Republic period, when she stood in the square between the Reichstag and the Kroll Opera.
Background:  The composer Klemperer, 37 years old; earns his living as a free-lance conductor.  A politician has enticed him to Berlin promising him a leading position for an innovative concert series, in which all the city orchestras would participate. 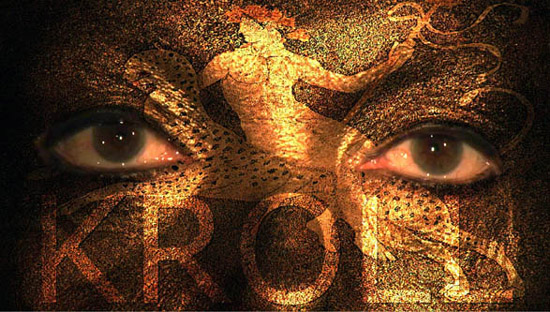 Klemperer feels his head becoming cramped.  The music he senses in him wants to happen, wants out, yet choir and orchestra of the State Opera refuse to co-operate with him, as his music would introduce methods not officially provided for.  The high-ranking personality who brought him to Berlin is no longer available.

Klemperer calculates the value of the energy required to force open the walls of a cultural temple.  In attempting this on his own, he injures his shoulder.  He can no longer conduct.  Short of money, he quietly moves to an abandoned  property storeroom, where he sets up a world of his own.  Despite this he wants to assert his rights and tries by submitting an application to the petition committee.  There the politician, Dr. Victoria Prutenia is enthusiastic about his plans and recognises in him a suitable partner for her own world of ideas dream world?) moulded by the ideal of Mitterand’s Grand Project:  It is her will that a new modern national opera be built on the Schlossplatz (Castle Square) according to  Friedrich Schinkel’s modified plans for the Castle Area, which, she maintains, were found only recently amongst the art objects looted by the Russians in Petersburg.  But quite soon these plans turn out to be fakes. Plunged into uncontrolled disappointment, somewhere between legislative and executive, Klemperer meets a man, who is reading a book about Otto Klemperer and quietly sketching something…

One morning a woman wakes up in a tree in a city park feeling dazed. A visionary dream has caused total amnesia; she is under the ecstatic influence of everything  she has experienced in that dream:  a numinous creature kidnaps her from home, reaches into her eyes and reshapes them. Then it trickles a few drops of a milky fluid into her throat.  Its male voice orders her to recapture its property in the city in which she awakes.  She is to set up a temple where people can gather and bond with him singing and dancing.  The woman sets off into the city, at first she doesn’t see too well; she feels strange/she doesn’t recognise herself.  She asks strangers on the streets where she can find people and places to sing and dance.  Drifts into the nightlife of Berlin: Yet the groups she finds and observes remain completely detached and unsatisfactory.  When she gets into really unpleasant difficulties, she instinctively resists so violently and ruthlessly that she becomes frightened.  The woman returns to the Zoo near where she woke up that morning.   She sees a goat and a goat herd girl.  Together they wander through the city, gathering people to form a new group and looking for a meeting place, have astonishing experiences from the awareness of their own fertility.  After one failure, it seems that the great dream will become reality: an investor offers an absolutely unbelievable location…

Finally the two stories meet together on the meadow, where the Kroll Opera once stood…